Printmaking without a Press (online class)

This is an online class

Want to make prints, but stuck at home without a press? Master Printmaker Sylvie Covey can show you how. Everyone is encouraged to work on their own imagery while learning the techniques of printmaking.

Sylvie Covey was born in Paris, France, and attended the École Nationale Supérieure des Arts Décoratifs, majoring in printmaking. After traveling around the world, she moved to New York City in late 1977 and enrolled in the Art Students League of New York. She was a teaching assistant for Michael Ponce de Leon and Seong Moy, and also worked at the Bob Blackburn Printmaking Workshop. She is a member of the Society of American Graphic Artists. She received a B.A. from SUNY Empire State College and an M.F.A. in graphics summa cum laude from Hunter College in New York City.
Ms. Covey has taught at the League since 1995, as well as at the Art Center of Northern New Jersey. She worked as the master printer at Hunter College until she was promoted to adjunct assistant professor. She created and taught a new class at Hunter College, Photoetching and Experiments in Graphics. In 2001, she joined the faculty of the Fine Arts Department at the Fashion Institute of Technology in New York to help develop a Bachelor of Fine Arts program. She is an adjunct professor at the Fashion Institute of Technology, where she teaches printmaking.
Ms. Covey has had solo exhibitions at the Condé Nast Lobby Gallery, the Chashama Gallery at Peep-O-Rama, Denise Cadé Gallery, International Art Contact, the Maison Française of Columbia University, and the Lobby Gallery of 1155 Avenue of the Americas, all in New York City. Her work has been exhibited in numerous galleries and museums, including the Katia Granoff Gallery, Paris; the Rotunda Gallery, Washington, DC; the E. C. Blum Art Institute, Bard College; the seventeenth and the nineteenth International Biennales of Graphic Arts, Ljubjana, Yugoslavia; the Salon d’Automne of the Musée du Grand Palais, Paris; the Museum of Contemporary Art, Kraków, Poland; the Consumentar ‘98, Nuremburg, Germany; the Museo d’Arte Moderna, Rio de Janeiro; the Ino-cho Paper Museum, Kochi, Japan; and the Sapporo Museum of Art, Sapporo, Japan.
Ms. Covey is represented by The Old Printshop Gallery in New York. Her work has recently been acquired by the Metropolitan Museum of Art and the New-York Historical Society collections. Her work is also included in the collections of the New York Public Library; Kidder, Peabody & Co.; Dean Witter Trust; the Reader’s Digest Collections; the Museum of Kraków, Poland; and the Museum of the City of New York.
Ms Covey is the author of Photoshop for Artists, a tutorial book published by Penguin Random House in 2012, and of Modern Printmaking, a hardcover 324-page book covering the history and all current processes for relief, Intaglio, lithography, silkscreen, and postdigital graphics, published by Penguin Random House in 2016. 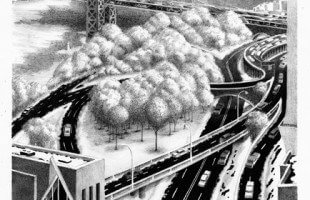